“I first came across these cards when my Mum got diagnosed with Alzheimer’s, & I wanted to be able to have a conversation with her before her memory had gone too far.

I found it a great tool to be able to start that conversation without being too confronting.  So the Life Story cards which I started with were a great introduction to getting more information & lots of things that I didn’t know about her I learnt during the conversations.

Once Mum was comfortable starting that conversation about her Life Story, it was much easier to broach the more difficult questions about end of life wishes.

Things like what she wanted for her funeral service, what kind of health care she wanted & I knew I had the peace of mind in knowing that her wishes were able to be exactly as she wanted them.”

“My sisters & I had talked lots of times about getting Dad to tell us what he wanted towards the end of his life. None of us could bring the subject up though. I bought both sets of cards, and Dad loved reminiscing about his life so we could make the My Life Journal as a keepsake. It was easy then to keep going with questions about his final wishes.”

Great idea. I bought both card decks as a gift for my Aunt & Uncle, as they’d mentioned wanting to “get something down in writing for the family”. The questions on both lots of cards are a great guideline & started conversations about their past and what they’d like for their final years. Thoroughly recommend.

I had attempted a few times to get Dad & Mum to talk about their thoughts surrounding issues that may come up as they get older. It never went very far, probably because we weren’t well organised about exactly what questions to ask.  These cards were the perfect solution. They really enjoyed recording their life story questions for the family to keep. We came back to  the questions about their end of life wishes at a later time, and found it much easier to start the conversation with the cards. They cover lots of possible outcomes, and they feel much happier that the family know what they would want.

Many thanks to  yourlifetalks.com  for encouraging our family to break the ice with our Grandparents and have a down to earth talk about their wishes. We all had fun asking them questions about their life story, and it just followed on easily to their wishes for their future.

My Granddad was terminally ill with cancer, and he lingered in a palliative care unit for 3 weeks being tube fed before finally being placed on ‘comfort care only’. My family felt it was not what he would have wanted, but as he had never openly discussed his end of life wishes we went along with the hospital staff.  My parents were pretty open to having a conversation about their own wishes after that, and the cards have provided a great starting point for us to sit down and record their wishes. 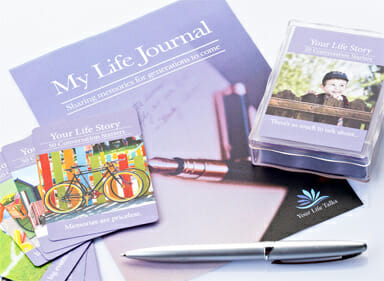 There’s so much to talk about… 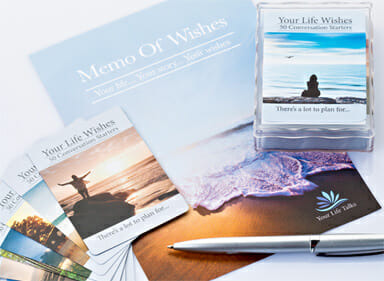 There’s a lot to plan for…

Buy your set of

Buy your set of

Do you need up-to-date information and resources before making decisions on your end of life wishes? Then visit:

Translate »
We use cookies to ensure that we give you the best experience on our website. If you continue to use this site we will assume that you are happy with it.OkPrivacy policy